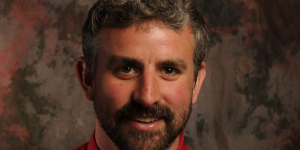 On a cold morning in January of 2017, I received a panicked call from my 88 year old grandma that she had fallen and needed help. After a night of lying on the floor, she managed to knock her cell phone off her night stand and dial my number. I arrived just as the paramedics did and was able to give grandma a hug as she was wheeled out of her apartment. About a week later, as she was about to be discharged to a rehab facility, she mentioned that she was lucky to be alive.

This statement is truer than grandma knew. According to the CDC falls are the leading cause of death from injury in the United States in persons older than 65. In Wisconsin, the situation is even more concerning as the state has the nation’s second highest death rate from falls. This rate is twice the national average.
In a Journal of Trauma article from 2010, Dr. Cheng offered some explanation of why falls are so dangerous for people over 65. As people age, their organs and bones are more sensitive to forces that occur if they fall. At age 80, bones, tendons and internal organs are more likely to break, tear, and fail than when we are 50. Dr. Cheng found that mild, low energy falls can have very serious consequences for people over 65. My grandma tripped over a piece of furniture in her apartment on the way to the bathroom. Her fall resulted in a broken shoulder with severe tendon damage requiring surgery and a two month rehab stay. If she had not been found when she was, she likely would have died from kidney failure as a result of her muscle damage. For younger people, tripping over furniture usually results in a few bruises and choice words.

The good news is there are actions that we can take to help prevent fatal falls. In 2011, The American Academy of Family Physicians released an article about falls and recommended interventions that have been proven to prevent them. These include exercise, modification of home environment, review and minimization of medications, and management of foot issues. Since her fall, my grandma has worked hard with physical and occupational therapy to become much stronger than she was before her fall, and she has switched to a safer apartment environment with less potential hazards. Hopefully, she will not fall again and the lessons that we learned from her fall will prevent fatal falls in other people as well.

Dr. Eric Smiltneek is a family physician with ThedaCare in Oshkosh and is devoted to helping Oshkosh stay active year-round. Dr. Smiltneek graduated from University of Wisconsin School of Medicine and Public Health in 2006 and has been in practice for 11 years.